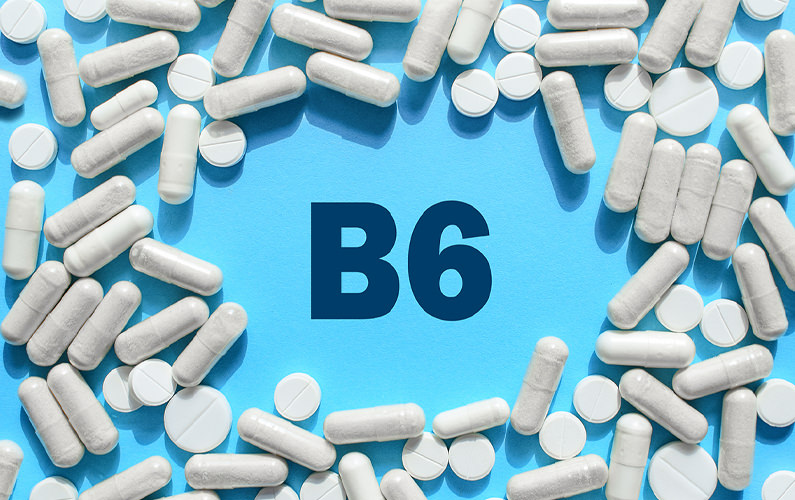 Vitamin B6 is a water-soluble vitamin that is commonly found in many foods and is often taken in supplement form. Vitamin B6 in coenzyme forms is involved more than 100 enzyme reactions, mostly concerned with protein metabolism. Pyridoxal 5’ phosphate (PLP) and pyridoxamine 5’ phosphate (PMP) are the active coenzyme forms of vitamin B6. You may find these in supplement form without the label of B6 but know that they are the active forms.

Vitamin B6 also plays a role in cognitive development through the biosynthesis of neurotransmitters and in maintaining normal levels of homocysteine, an amino acid in the blood. Vitamin B6 is also involved in glucose metabolism immune function (for example, it promotes lymphocyte and interleukin-2 production), and hemoglobin formation

Vitamin B6 deficiency is infrequent. It is associated with anemia, depression, confusion, weekend immune system, EEG abnormalities(abnormal brain waves) dermatitis with cheilosis (scaling on the lips and cracks at the corners of the mouth) and glossitis (swollen tongue). Mild deficiency may show no signs or symptoms for months or years. Vitamin B6 deficiency is more common in people with liver, kidney, digestive or autoimmune diseases, as well as smokers, obese people, alcoholics and pregnant women.

B6 toxicity is quite rare. However, the chronic taking of pyridoxine for more than a year can cause severe and progressive sensory neuropathy characterized by ataxia (loss of control of bodily movements). The severity appears to be dose-dependent. and the symptoms usually stop if the patient discontinues the pyridoxine supplements as soon as the neurologic symptoms appear. Other effects of excessive vitamin B6 intakes include painful, disfiguring skin lesions, photosensitivity and gastrointestinal symptoms, such as nausea and heartburn.

Where is B6 Helpful?

B VitaminsB6 – What You Need to Know